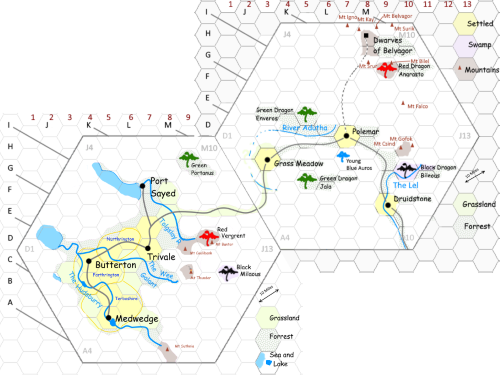 We are up to session 12, we have two dungeon masters running regularly (Andras is running the Trivale domain next door to Polemar), we have two new dungeon masters in training, we had 16 players at the last session and 6 others with characters who didn’t happen to show up that day (fortunately  ). We have had to turn people away from time to time due to overcrowding.

The write ups are here (I am behind at the time of writing, this may become an issue as things grow, not sure).

The “DMs in training” will first be tasked with running small set piece adventures in the existing domains. As they find their feet we will help them create new domains to run.

Each session now the players gather and do the “between session” prep, allocating some of the in game time to travelling to whichever domain they are going to play in (if not already there).

At present my domain has the most elaborated content so in that area there is always a rumour list at the start and the players pick and head off, often getting sidetracked as they go and having a different adventure. Andras’ domain is just at the beginning of development so things are a little more linear there for the time being. However each adventure there has spawned some replayable content so it wont be long before that is as rich a domain as Polemar. We have also fleshed out some ancient history about a great war and the origin of dragons that is informing many of our new content choices.

We have learned a few things on the way:

Time consistency is very important. The game date synchronises with the real life date at every session and the players always start in the domain’s home base no mater what. The other game masters are currently also adventuring in Polemar and that has become a bit “dedicated table”ish which puts them in a time warp for regular play. I don’t want that happening very often.

As players move from DM to DM its important we keep close to vanilla rules, with those minor variations we all agree upon. It also means we wont have other RPGs or settings for the open table. We will eventually help coordinate dedicated tables among the players when they are interested and then its open season.

We are going to need an up front code of conduct. The numbers are growing and so are some of the tensions. The code is to limit friction, prevent harassment, and if all else fails block disruptors. Its also important to remember that the DMs are not doing this as charity work or social work, they are just playing a game to have fun along with the players.

And a radio interview happened, which boosted the number of players showing up by quite a bit!

That’s the quick update. I am thinking of opening up at another shopping mall on different weekends but this set up needs to be better established first. I’m also thinking of booking a room at the library upstairs where some of the tables would be run, far from the madding crowd.

I am also looking toward doing some Traveller open table, probably that would be online using something like Roll20. It will need some different structures so I’m investigating that.

We have occupied the local library meeting rooms for our sessions.

I have begun codifying the core public open table process.

One thought on “Constructing an Open Table Campaign for D&D 5e: An update”