The big day for the first public flight of this beast is Saturday, 25th of Feb, 2017. Two days away!

I have pregenerated 6 characters, leaving the role playing part of the character backgrounds (traits etc), the alignment and the character names blank. We can quickly fill those in on the day, giving the players some connection to their character sheet. I have tidied up my character sheet template a couple of times as a consequence, and some extra changes are still needed for the spell caster side of things. I will always try to have a full 6 pregens ready at each session but hopefully I will use fewer due to repeat plays.

Each character gets a printout of the new player map, a copy of the quick rules cheat sheet, and a log page to track sessions and experience. Spell casters also get a print out of all the cantrips and 1st level spells available to them. The game shop is stocking up on PHBs for those that want to continue playing past the 1st level and who need more than the free pdfs (http://dnd.wizards.com/articles/features/basicrules).

The shop has been doing a little recruiting, and I have let my board game club know about it. I have 3 confirmed players already, which is enough to go with even if no one else shows up. I am also looking at perhaps engaging a room in the library upstairs for people to start running their own dedicated tables at the same time as the open table sessions. But that’s for later.

As this is a low prep philosophy set up I have done some quick tool creation for encounter generation on the fly. First I whipped up a spreadsheet to handle the formula for constructing encounters by XP Threshold given on page 82 of the Dungeon Master’s Guide. This system may not give perfectly balanced scenarios but its a good enough rule of thumb, and its easy once you have a supporting tool. Just put the number of PCs at each level for the session, put the number of creatures for each CR level in the appropriate place and read off if the formula thinks that is very easy, easy, medium, hard or deadly. 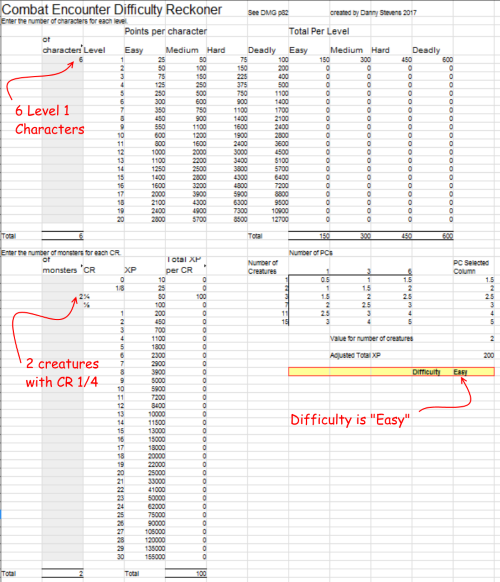 The other thing I need is a quick random encounter table. I have done one intended for the general forests, and it will do for all situations until I have some more done for other places.

I have the stat blocks for each of these in seperate files so I can just pull each up on my screen as needed and find the correct file easily by name. I grouped together all spiders in one file, all snakes in another, and all wolf types including worgs and warewolves in another.

The stat blocks are from the free pdfs, with missing extras typed in by me if needed. (I was going to just scan them but I found the scan picks less kind to my ageing eyesight).

(Update: I have developed a random encounter framework mechanic and provided it as a PDF)

The dragons, their minions and large groups of monsters are certainly factions in their own right but I’m interested in the factions moving and shaking things in the civilised world. I have made brief sketches for the human Elf Removal League, the elvish Reclaim the Empire faction, the Dragonslayer Secret Society ( a dangerous and delusional one at that), the Thieves and Assassins Guild of Druidstone and the Mining Land Holding Group amongst a darker part of dwarvish society. Their names suggest agendas. I haven’t gone much deeper than that yet.

Polemar has a population of about 5,000. Its structures are mostly wooden and it is surrounded by wooden palisades. The streets are mud and straw, by and large. Two major taverns exist, The Axe and the The Wagon, each catering specifically to lumber folk or trade caravans.

Grassmeadow is a town of brick and wide, cobbled streets with a population of 4,000. It supplies its own clay from the banks of the Adutha, and they make fine tiles and shingles.

Druidstone is a city of 15,000. Its buildings are largely made from bluestone quarried locally. The streets are narrow between buildings, and gravelled. Most buildings are at least two stories tall and awnings and wooden roofs over arch the roads below. There are bridges across the streets generally at the third of fourth level of adjacent buildings, and paths that allow foot traffic to move several blocks high above ground.

So What About Some Adventures?

As my earlier session 1 and session2 demonstrate I have enough here to make adventures up on the fly. However its good to have some more going on with some prepped structure. I knocked up some factions, considered some fall out from the previous two sessions, and then raided some old Dungeon magazines from 1994 to steal some ideas and revamp them for 5th edition.

Here is my rumour list for the players in my first public session:

That’s enough possible situations for the players to choose from, as well as just “lets go exploring” if they so desire. None of the scenarios actually has a plot line, just characters in motion with agendas. The ones that come from the magazines only have the main elements in common with the originals. Their story lines have been removed, and everything rebalanced as needed. I’ll give examples of the actual process for some of these after they get played out.

And The Dungeon Crawls?

I have some rough mud maps for the ruins, and the beginnings of an Underdark hexcrawl lying beneath the Polemar map in three levels, each 100′ below the other. Each of the ruins has entrances to the Underdark, as well as a number of the mountain locations and a smattering of other places. Its all just enough to wing it if I need to. The whole campaign will get slightly more refined, a little more detailed during and between each session.

On to the update.