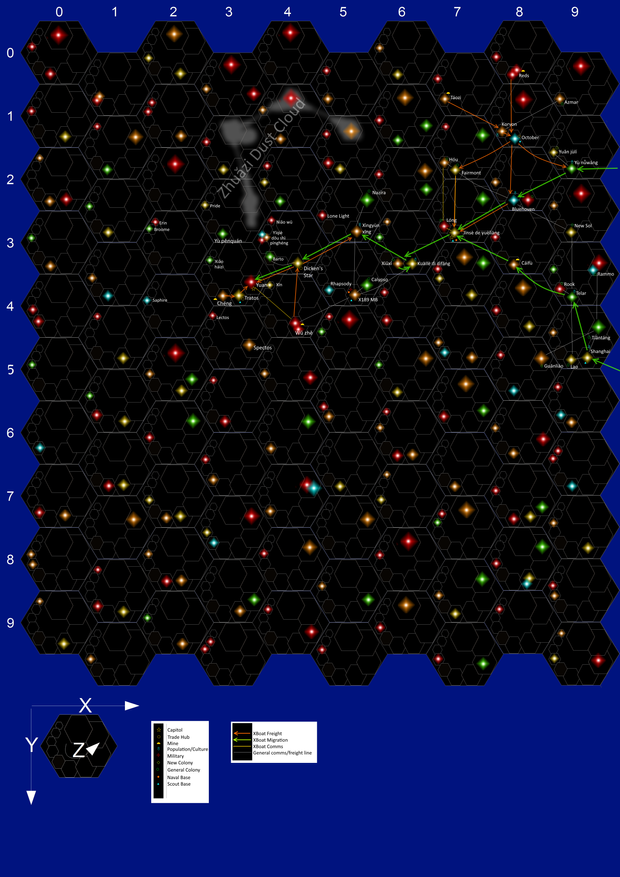 ( This was posted to my Patreon account in 2016 but belongs here now. )

This is an example of the level 2 detail for the low prep, rich Traveller campaign building system.

The Yuan Sub Sector is on the spinward end of the Free Terran Confederation.

Note that I am using a 3d, 10 across, hex map, rather than the standard Traveller 2d map.

The bulk of the star systems in this sub sector are unexplored. Only those closest to the player start system of Tratos are named.

The Yuan League is a faction of industrialists, associated with the Expansionist faction, that are looking to explore and colonise nearby star systems and grow Yuan’s general wealth and prestige. Recent civil unrest in the Yuan system, lead by X-ers and to some degree by The Syndicate, is causing deep concern in the League. They have requested a Naval presence in the system to stem the tide.

The Syndicate is a smuggling network based in the Yuan system and distributing nano-mind-bots as far as Kuàilè dì dìfāng. Agents of The Syndicate have recently been captured attempting to sabotage scout ships that were engaged in operations to stem the mind-nano-bot flow and apprehend pirate ships in the Yuan governed systems.

This is enough detail at this level of prep for play to begin.

See Also: RPG Geek experiment of using NPC development to flesh out worlds in the sector.